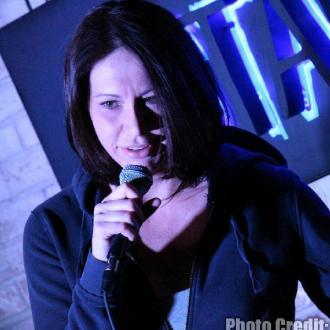 Blue Comic, Jen Remauro, is full of unstoppable zest, wit and inappropriate statements. As a fresh face in the comedy industry Jen has performed at an array of clubs all over the East Coast & Los Angeles. She has also featured/hosted for some heavy hitters in the industry such as, The Reverend Bob Levy, Jim Florentine, Don Jamieson, Rich Vos, Bonnie Mcfarlane, Otto & George & Darren Carter. Besides producing laughter from the stage, Jen also writes and books celebrities for radio shows & podcasts. She has recently joined The Riot Cast Network and currently books for one of their top rated shows, The Glory Hole. She can also be seen as a weekly regular on The Reverend Bob Levy's video podcast, Levyland Live. Her hilarious sense of humor, quick wit and unique writing skills has gained her plenty of recognition amongst veteran comedians on Twitter which has led to her booking some top notch guests during her career such as Jesse James, Sandra Bernhard, Robert Kelly, The Reverend Bob Levy, Lisa Lampanelli, Faizon Love, Jim Norton and Rich Vos. Jen has been featured on MTV’s “Beach House” (1997), “Change of Heart”(2002). TLC’s “A Baby Story” (2005) Gawker.com (2011) NBC Extra (2011) and PerezHilton.com (2011) and is currently working on a T.V. pilot in NYC & L.A.