Rachel Feinstein at The Celebrity Theater

Rachel Feinstein is a nationally touring comedian and actress. Huffington Post called her “the only comedian we've seen who can go from embodying her grandmother in one breath and a predatory guy on the street in the next and be equally convincing at both.” She has had three Comedy Central specials, including the most recent ‘Amy Schumer Presents Rachel Feinstein: Only Whores Wear Purple’. Rachel recently recurred on the Steven Soderbergh Amazon series RED OAKS and on Judd Apatow's HBO comedy CRASHING. She also guest-starred on Bravo’s ODD MOM OUT. Her past credits include TRAINWRECK, TOP FIVE, THE NIGHTLY SHOW WITH LARRY WILMORE, HBO’s LAST WEEK TONIGHT WITH JOHN OLIVER, co-hosting THE VIEW on multiple occasions, and several appearances on INSIDE AMY SCHUMER. You may also remember Rachel co-hosting alongside Shaq on UPLOAD WITH SHAQUILLE O’NEAL. 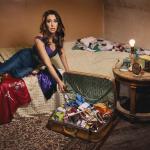